The single stroke seven drum rudiment is a favorite technique among drummers around the world.  It is a very useful rudiment that most drummers want to incorporate into their playing style. The rudiment allows drummers to play quick shots and fast rolls. Though the rudiments are quite similar to the single stroke four rudiment, as the name suggests the single stroke seven utilizes three extra notes to create an output of a seven-stroke pattern. These basic rudiments form a part of the forty International Drum Rudiments and have been one since nineteen eighty-four.

The drum rudiment, single stroke seven, incorporates seven consecutive separate individual strokes that can either be played as eighth note triplets or as sixteenth note triplets. The utilization of the different strokes to create an output of a pattern of seven alternating single strokes makes this rudiment a part of the single stroke family of drum rudiments. It is precisely like a single stroke four rudiment with the addition of three extra notes. Thus a drummer who can successfully play the single stroke four rudiment is likely to find this rudiment a bit easier to play. While practicing this rudiment, drummers should concentrate on playing evenly spaced and utilizing both hands as one can often face a problem while performing the rudiment with their weaker hand. The drummer should also keep in mind that each of his strokes should have a consistent sound.

Factors That Drummers Should Consider

Drummers should consider a few factors before actually trying the rudiment to avoid flaws that can hinder the performance and even cause physical damage to their bodies. The hand placement plays an important part in any drum technique, and it is the same with the single stroke seven rudiment. An incorrect stick grip can not only hurt a drummer but also reduce the quality of the performance. The drummer should even check if the size of the stick is ideal for him as a stick of the wrong size can lead to severe consequences.

Let us check a couple of exercises that drummers can pick up to learn the single stroke seven drum rudiment.

1. The first exercise is an eighth note triplet played at half time. A single stroke separates the hi-hat note and the note at the snare drum. The drummer should start with a single stroke seven on the hi-hat, and as soon as he gets used to the pattern, he should alter the pattern and play the seventh stroke at the snare. The drummer should also add the bass drum on the first count and the Tom in the fourth to make the pattern sound more complete.

2. The second exercise is yet another eighth note pattern played on half time. The exercise has the same rhythm pattern as the first use, and the only difference between the two is the orchestration. Drummers can use this exercise to build new and different sounding drum grooves by altering the position of the strokes in the patterns they can already play. 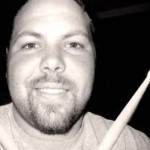